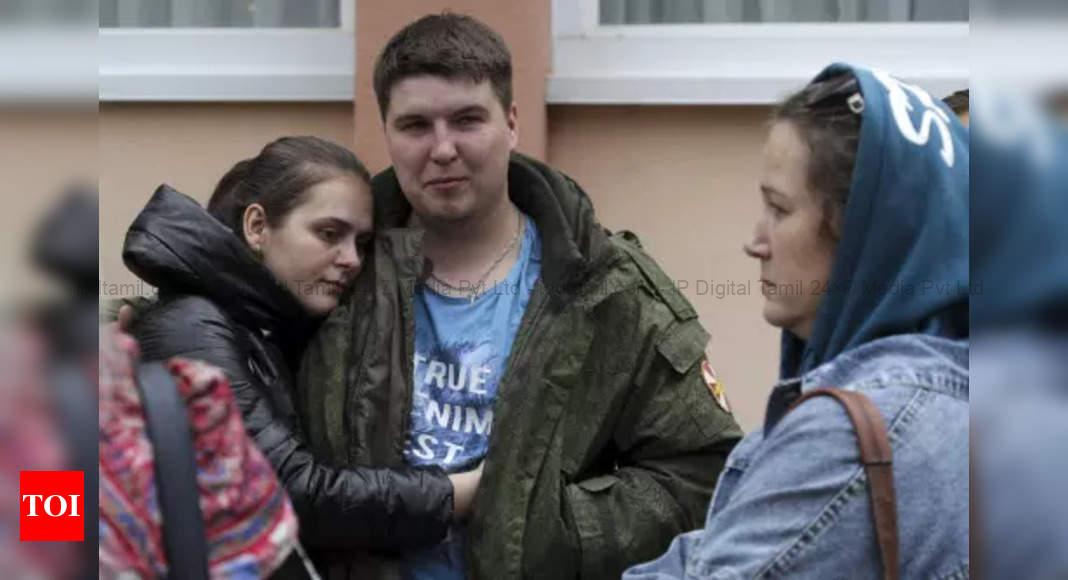 Desperate to rescue their sons and husbands from the front lines in Ukraine, Russian women are putting pressure on the Kremlin in the latest sign of the spreading discontent caused by the war.
The scattered efforts by wives and mothers took off after Vladimir Putin ordered 300,000 reservists called up on September 21, forcing the authorities to pay attention. Regional governors have met activists and promised to help and the Russian president is planning to hold a session of his own with them as early as this week.
As the war grinds into its ninth month, Putin’s efforts to shield his population from the costs of the fighting are wearing thin in spots and the Kremlin is racing to reduce the impact where it can. Authorities are promising cash and other benefits for families of those called up and pledging to make sure they’re properly equipped and taken care of.
Protests against sending mobilized relatives to the front have taken place in at least 15 regions, with the biggest near the border with Ukraine, according to data collected by Verstka, an independent media outlet that’s one of the few covering the movement. Families’ demands typically aren’t political, focusing on ensuring their menfolk get adequate training and equipment and are taken care of at the front.
They’ve gotten some high-level attention.
Putin admonished officials earlier this month to make sure that concerns are addressed, vowing to “talk to people myself to get some feedback” on the situation.
The governors of some regions near the Ukraine border have promised to help, though activists said results have been limited so far. Other officials rejected the appeals flat out, saying the soldiers at the front are “alive and well.”
“These people don’t want to stop the war, they want to improve soldiers’ conditions,” said Ekaterina Schulmann, a political scientist and a fellow at the Robert Bosch Academy in Berlin. “But for that reason it’s harder for the authorities to ignore them or to frame those protests as extremism or foreign influence.”
Opinion polls show support for the war has slipped since the highs seen in its first months, before Ukraine’s counter-offensive forced Russian troops to give up vast swathes of territory. Anxiety spiked at the announcement of the mobilization, which triggered an exodus of as many as half a million Russians from the country.
Soldiers’ mothers have been a political force in Russia for decades, as activists sought to rescue draftee sons from harsh treatment. The movement strengthened in the 1990s, seeking to bring back soldiers sent to fight in the Chechnya region. This time, a group claiming to represent the families said it has supporters in 89 cities.
State TV hasn’t given much attention to the families’ protests, which have been widely discussed in social media. Videos of angry wives heading near the war zone to rescue their relatives have circulated widely in social media, though none have been confirmed officially.
In a video appeal posted by Verstka on November 9, the wife of one those mobilized said his company commander revealed that only about 30 out of 200 men had made it to safety after they came under fire in Luhansk, eastern Ukraine.
In another video posted a day later by a group of 20 women on the Russian border with Ukraine, they vowed to go to the front line to recover their husbands and sons and brothers. “If they don’t come out and help us, we’ll go, including a pregnant girl,” one of them said, adding that their relatives were without body armor or helmets and dragging wounded comrades with them.
Amid the official expressions of sympathy, the authorities are cracking down. One group said authorities threatened one of its activists, a schoolteacher, with arrest if she didn’t keep silent. Draftees are also being warned their family members should stop protesting.
On November 22, a soldier from the Altai region in Siberia who had appealed to the governor in a video for proper equipment and training for his unit offered his excuses and thanked officials for providing the necessary military kit.
“We jumped to hasty conclusions, I ask you to forgive me. We’ve been fully equipped,” he said in the message posted by regional authories on Telegram.

Rajinikanth Announced His Entry In Politics On This Day