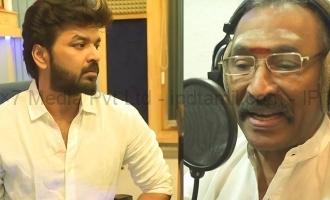 Jai and Sundar C starrer ‘Pattampoochi’ is all set to hit the cinema halls on June 24 and the promotional works of the movie are going on in full swing. Meanwhile, a kuthu song from the film has recently surfaced over the internet and gone viral.

Actor Jai, who played the aggressive villain in ‘Pattampoochi’, is also the music composer of this film. Thenisai Thendral Deva has rendered his voice for the song composed by Jai. Fans are all cheered up to hear Deva’s voice in a kuthu song after a long time. The folk number is trending on social media.

The movie is reportedly set in the time period of the 1980s about the face-off between a cop and a psycho killer. ‘Pattampoochi’, directed by Badri Narayanan, stars Honey Rose, Imman Annachi, Baby Manasvi and others. With music by Navneeth S, Esakki Krishnasamy has handled the cinematography and Fenny Oliver S has taken care of the editing.