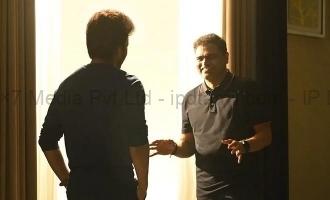 We recently updated you that Vijay and Vamshi Paidipally’s ‘Thalapathy 66’ shooting is currently progressing in Chennai. Produced by Dil Raju’s Sri Venkateswara Creations, Rashmika Mandanna is playing Vijay’s romantic interest in the film, which is touted to be an emotional family drama.

It is known that the makers moved to Chennai for the shooting after wrapping up a major schedule in Hyderabad. The cast & crew camped in ECR Chennai and filmed for ‘Thalapathy 66’ on a huge set erected there near the residential area. Also, a few BTS stills were leaked from the spot. Due to this, it is being reported now that the makers have changed the shoot location.

The team has now changed the shooting location to another private spot, and the shifting of set works is underway. Therefore, the filming of ‘Thalapathy 66’ was halted for a few days so that the unit can do the shifting work, and the work will resume once the set is recreated again. On the other hand, sources say that the film is titled ‘Varasudu’ which in Tamil is ‘Vaarisu’.

The ensemble star cast of ‘Thalapathy 66’ includes Sarathkumar, Yogi Babu, Shaam, Srikanth, Khusbhu, Jayasudha, Sangeetha, Samyuktha and others. Thaman S is composing the musical score for the movie while Karthick Palani handles the cinematography. ‘Thalapathy 66’ is slated to hit the silver screens on Pongal 2023.