This actress to turn into Chandramukhi for part 2? – Hot update – Tamil News 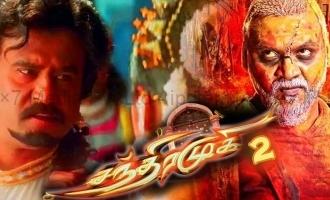 Superstar Rajinikanth’s ‘Chandramukhi’ is an evergreen film in Tamil cinema, starring Jyothika, Vadivelu, Nayanthara and Prabhu in the lead roles. The psychological horror movie became one of the biggest hits in Kollywood. Meanwhile, the film’s director P Vasu officially announced the sequel a few days ago.

As speculated earlier, Raghava Lawrence will play the lead role in P Vasu’s directorial ‘Chandramukhi 2’. Subaskaran of Lyca Productions is funding the project which also stars Vagai Puyal Vadivelu. The sequel has music by M.M. Keeravani aka Maragathamani with R.D. Rajasekhar handles the camera and Thotta Tharani takes care of the production design.

Now, the latest we hear from our sources is that Andrea Jeremiah or Raashi Khanna might take up the female lead role opposite Lawrence. Sources say that the talks are underway with the heroines and an official announcement will be made soon when it is finalised. Notably, both the actresses have acted already in ‘Aranmanai’, the famous horror franchise.